Whether you live in an urban megacity or rural farmland, you surely see plastic bags blowing around anytime you leave the house. Some blow across roads like post-apocalyptic tumbleweed, while others become snagged in the branches of street trees. Still others end up floating through our creeks and rivers until they find their way to the sea. But while these plastic bags are certainly not pretty, they actually cause real, tangible harm to the greater environment.

Plastic bags tend to disrupt the environment in a serious way. They get into soil and slowly release toxic chemicals. They eventually break down into the soil, with the unfortunate result being that animals eat them and often choke and die.

Plastic bags cause several different types of harm, but three of the most troubling problems they present include the wildlife Harm. Animals suffer harm at the hands of plastic bags in a number of ways. Many animals – including both terrestrial and aquatic varieties – eat plastic bags, and suffer from serious health problems once they do. A significant number of cows, for example, die each year after eating plastic bags that end up in their grazing grounds. This has been a particularly big problem in India, where cows are numerous and trash-collection sporadic. Upon surgical examination, many of the cows injured by this plastic plague are found to have 50 or more plastic bags in their digestive tracts.

Animals who swallow plastic bags often suffer from intestinal obstructions, which typically lead to a long, slow and painful death. Animals can also be poisoned by the chemicals used to create the bags, or from chemicals that the plastic has absorbed while making its way through the environment.

And because plastic doesn’t break down very readily in the digestive tracts of animals, it often fills their stomachs. This causes the animals to feel full, even while they slowly waste away, eventually dying from malnutrition or starvation. But while livestock and domestic animals are certainly at risk from plastic bags, some animals are suffering even greater harm.

Already stressed by habitat destruction, decades of poaching and climate change, sea turtles are at particular risk from plastic bags, as they often mistake them for jellyfish – a popular food for many sea turtle species.

In fact, researchers from the University of Queensland recently determined that approximately 52 percent of the world’s sea turtles have eaten plastic debris – much of it undoubtedly originating in the form of plastic bags (Greener Ideal Staff, 2018).

Due to the cooperation between the government and the private sector, there is now a new government policy ordering department stores and supermarkets to stop giving single-use plastic bags starting on January 1, 2020. In observance of this new policy, the Energy and Environment Conservation Committee and Green Office Project of MUIC have a new project called “No Plastic Bags.”

Under this project, stores in MUIC will stop giving single-use plastic bags in every purchase starting on February 3, 2020. In line with Mahidol University’s ecological strategy and government policies, this project is also MUIC’s way of creating awareness among students, faculty and staff of the serious harm that plastic waste brings to the environment. We hope that this project will serve as an opportunity for everyone to do their part in saving the environment.

The Environment and Energy-saving Committee launched the “MUIC Says No to Plastic Bags” campaign, encouraging members of the MUIC community to use tote bags instead of plastic bags in their shopping by sharing and / or returning their clean tote bags in front of the newly-opened 7-11 convenience store. In this campaign, participants were asked to design and color their own tote bag as part of efforts to raise awareness about the environment. 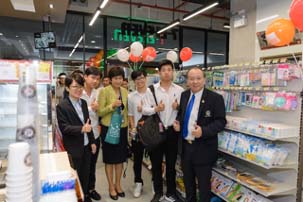 Fred Mulder. (2006). The advancement of Lifelong Learning through Open Educational Resources in an open and flexible (self) learning context1. Retreived on 17 September 2020 from https://www.researchgate.net/publication/238695040_The_advancement_of_Lifelong_Learning_through_Open_Educational_Resources_in_an_open_and_flexible_selflearning_context1

MUIC Partners with EU in Beach and Canal Cleanup