Mahidol University International College (MUIC) held a memorial service for Mr. Alex Korff on May 3, 2019 at Charinyarasami Hall, Aditayathorn Building. Mr. Korff started out as a part-time faculty member of the Humanities and Language Division in 1991 before shifting to full-time status in 1999 and performing other duties like English Program Director, Kaleidoscope magazine editor, Drama Club adviser and director, and others until he retired in 2015. He passed away on March 24, 2019 from colon cancer. He was 84. (For the full text of his obituary, please read below.)

Remembering Alex Korff: Mentor, Colleague, Friend
It was indeed a celebration of Ajarn Alex Korff’s life in the afternoon of May 3, 2019, as friends, former colleagues and alumni gathered at Charinyarasami Hall for his memorial service. A tear or two were shed as everyone reflected on his passing, yet there were also smiles and even bursts of laughter as the speakers recalled not only his valuable contributions to the International Students Degree Program (ISDP)and Mahidol University International College (MUIC) but also his well-known sarcastic sense of humor, his acerbic wit, and his gift of “terrorizing” his students into learning yet balancing it with an affection that only a surrogate father (or in his case, a surrogate grandfather) could give.

He started teaching part-time at ISDP, the forerunner of MUIC, in 1991. Prof. Dr. Serene Pibonniyom, the ISDP’s first Director, lauded Mr. Korff’s contribution to the fledgling program.
“He helped us from the early days of ISDP. I asked Mr. Korff to take care of students who failed the admission test. So he started a tutorial class. Many of these students later passed when they took the admission test again.” These tutorial classes later on became the basis for the Pre-College Program, now known as the Preparatory Center for English and Mathematics.

When Prof. Dr. Chariya Brockelman succeeded Prof. Dr. Pibonniyom in 1997, she tried her best to persuade Ajarn Alex to teach full-time.
It took two years, but eventually he did. Once he was in, he wasted no time taking on non-teaching assignments. Prof. Brockelman said that one of Ajarn Alex’s outstanding qualities was his willingness to take on additional tasks especially if it was for the further development of the College. On top of his teaching duties, he developed MUIC’s admission tests (both English and mathematics components), checked the applicant’s papers and even interviewed those who passed the test.

With his literary and creative inclination, he established the Drama Club. He wrote, produced and directed an average of two stage plays every year, providing students with a productive outlet for their creativity.
By February 2000, he was appointed English Program Director, taking into account not only his gifts as a teacher but also his years of experience as an able educational administrator back in the US.
He was the go-to writer and editor of MUIC, with his tasks as varied as writing marketing copy for brochures and other PR materials, and editing annual reports, student manuals and other official documents. In 2002, MUIC launched its very first newsletter with Ajarn Alex as editor. Renamed “Kaleidoscope” and reformatted as a magazine two years later, the publication became the full-time responsibility of Ajarn Alex, who took on the challenging task of chronicling major developments in MUIC.

“He was a very kind and generous man who helped us become more effective in pursuing our department objectives,” said Mr. Nutthaboon Pornratthanacharoen, Chief of the Public Communication Section at the time Ajarn Alex was Kaleidoscope magazine editor.

In the classroom, Ajarn Alex developed the reputation of being a tough teacher. Mr. Michael Naglis (Business Administration, Class of 1998), a faculty member at MUIC’s Tourism and Hospitality Division, was one of his students. “Back then, students know you have to pass the courses of the so-called ‘Three Guardians of ISDP / MUIC.’ They’re Dr. Charles Freeland, Dr. Peter Smith, and Mr. Alex Korff.”

Mrs. Piyanut Kotsan, a Travel Industry Management graduate from the Class of 1999 who is now Executive Director of Amnesty International Thailand, remembered Ajarn Alex as “quite scary” the first time she attended his Composition class. “He didn’t often smile in class,” she said.

Mrs. Suttasynie Lhuengusakul (Business Administration, Class of 2003) recalled the time when Ajarn Alex ordered her to recite a very long passage in front of the class the following meeting…or fail.

But all of them easily saw through the crusty exterior of the old teacher. Mrs. Piyanut said Ajarn Alex taught lessons beyond the subject matter of composition, teaching them about social and environmental concerns, reminding them of how they can contribute to society. “He emphasized the value of real education and not just earning a college degree,” she said.

When Mrs. Piyanut started working in a non-government organization, Ajarn Alex would invite her as a guest speaker in his classes. He also gave his support by attending activities that she had organized.
Mrs. Suttasynie said, “He kept you on your toes and made sure you learned.” She became president of the Drama Club and her batch, under the tutelage of Ajarn Alex, successfully staged three plays in one school year. Soon they saw that the tough teacher had a soft side after all: “He invited us to his home, cooked pizza for us and talked about politics.”

Mr. Naglis, who became closer to Ajarn Alex after he started working with him in MUIC, described him as “a great friend who looked like a grandfather but felt like a father.”

Ajarn Alex’s colleagues also appreciated his friendship. Assoc. Prof. Dr. Peter Smith, who had been with ISDP and MUIC from the very beginning, recalled, “Alex was a very good friend. A very dedicated teacher who inspired his students.”

Dr. Charles Windish remembered Ajarn Alex well as a member of the panel that interviewed him, who afterwards told him that he looked forward to working with him. “Alex felt the students’ need to learn not only English but also global realities. Students benefited from him. Younger faculty members considered him as a mentor.”
He also described Ajarn Alex–who at the time would have been nearing 70—as still yearning to try his hands at other tasks. “I want to try other projects,” Dr. Windish quoted him as saying.

In 1964, he was ordained a priest in the Roman Catholic Church under the Society of Divine Savior (S.D.S.).
He held a succession of jobs in diverse fields, including secondary school instructor, university lecturer and administrator, artist-in-residence, education director, conference coordinator, and Peace Corps volunteer, among others.

His work brought him from Wisconsin to Maryland, from New Jersey to New York, from Hawaii to the Philippines, from Mexico to Thailand.

Ajarn Alex retired from MUIC in October 2015. He did not completely fade away. He remained a fixture in the campus—with his slow gait, his white hair and beard, and his aviator sunglasses—occasionally seen visiting old friends and colleagues. He also kept in touch with former students, joining them for lunch or dinner to talk about politics or, lately, his favorite TV series, “Game of Thrones.”

Over the years he had many ailments—most of which he just either dismissed or did not talk about—but on March 11, 2019, he was admitted at Thonburi Hospital after doctors found out that his colon cancer had recurred.
Mr. Naglis and Mrs. Piyanut took care of him during his last days.

Up to the end, Ajarn Alex still kept his witty humor. The audience in his memorial service could not help but laugh as Mr. Naglis narrated some of Ajarn Alex’s funny comebacks while in the hospital.
Told that his visa had expired, Ajarn Alex retorted, “Do I look like someone who needs to do a visa run?”
When the doctor came by during one of his daily visits, he asked Ajarn Alex how he was feeling.
His answer? “I was alright till you asked me.”

The old man gave a good fight, but in the morning of March 24th, Ajarn Alex passed peacefully in his sleep. He was 84.
Following his last wishes, his remains were cremated on March 27th at Wat Suwannaram in Salaya district, followed by a simple ceremony at Wat Rai Khing in Nakhon Pathom province where his ashes were scattered on the Tha Chin River.

Aside from his wicked sense of humor, one of the notable qualities of Ajarn Alex that was remembered that afternoon was his modesty, his willingness to go beyond his designated duty without extra compensation, and his unheralded devotion to charity. Prof. Brockelman would always remember him complaining “for paying him much more than he deserved.”

Bedridden, he asked Mr. Naglis not to tell anyone about his condition, even requesting him to keep people from visiting him, for he did not want to disturb them.

He refused treatment for his cancer and instead just opted for pain management. He also requested that no funeral be held for him. He made all these decisions so that the money saved would be given instead to charity. During the memorial service, an endowment from Ajarn Alex’s life savings was turned over to Fr. Joseph Maier on behalf of the Human Development Foundation Mercy Centre which takes care of street children in Bangkok’s slums.

And that is how we in the MUIC community wish to remember Ajarn Alex by—a tough-talking yet considerate teacher, an editor conscientious with the smallest detail, a devoted employee who always went the extra mile, a former priest who never shed his love for society’s downtrodden, a caring friend who never wanted to impose on other people.

Godspeed, Ajarn Alex. Rest in peace. Thank you for everything. 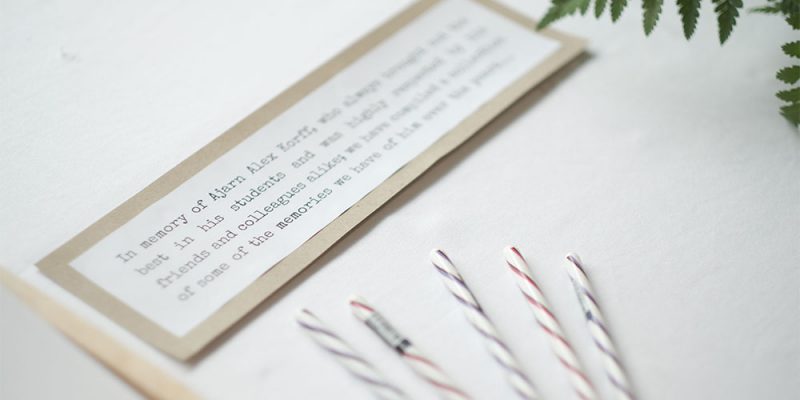 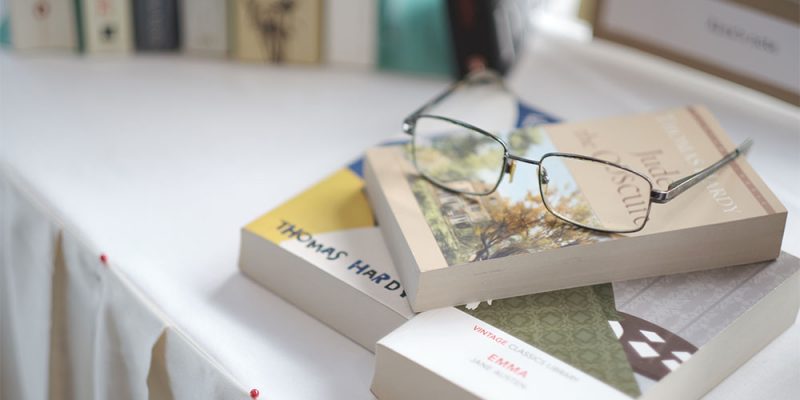 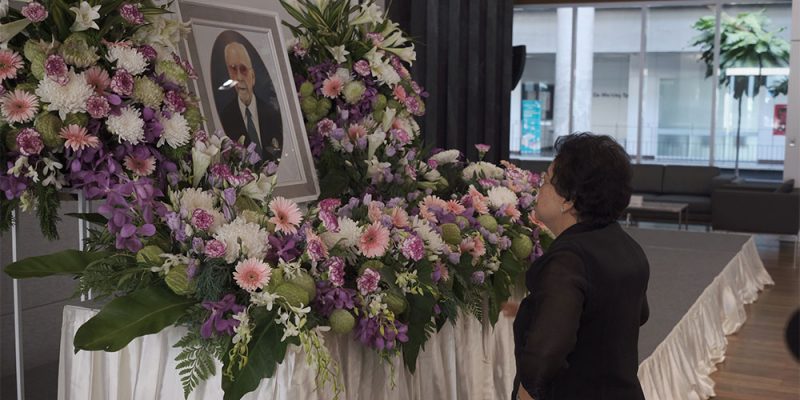 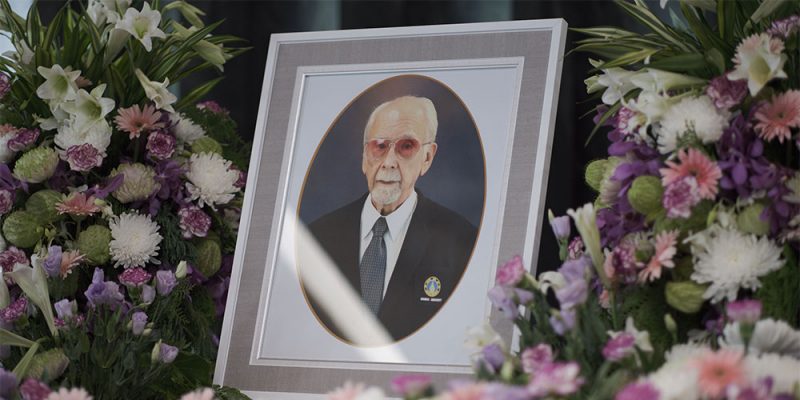 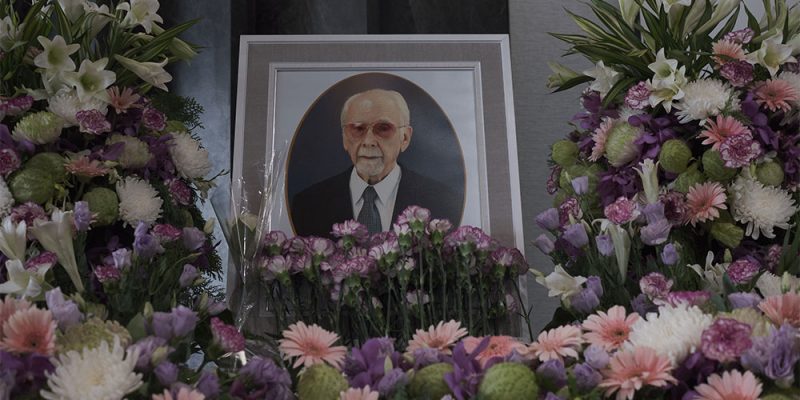 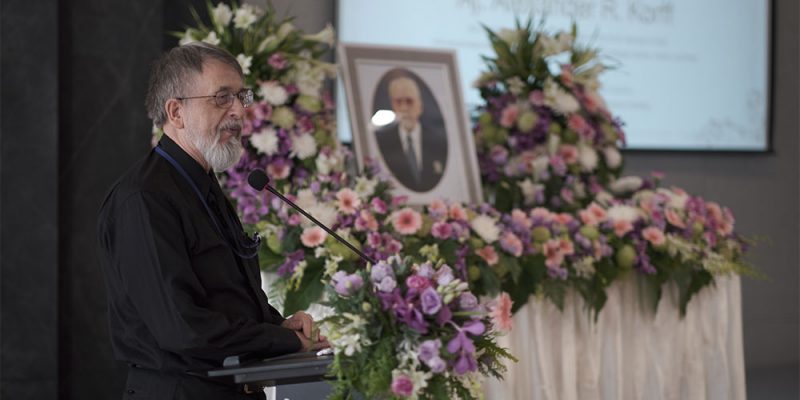 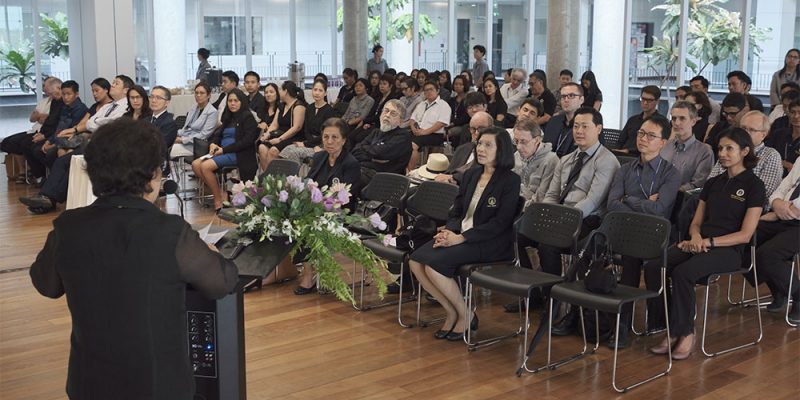 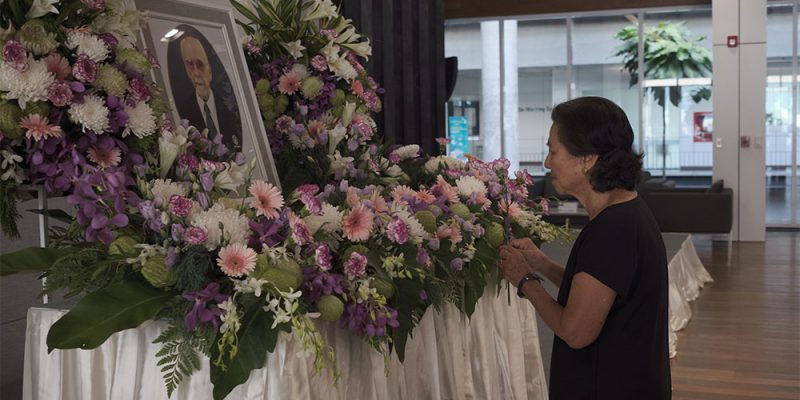 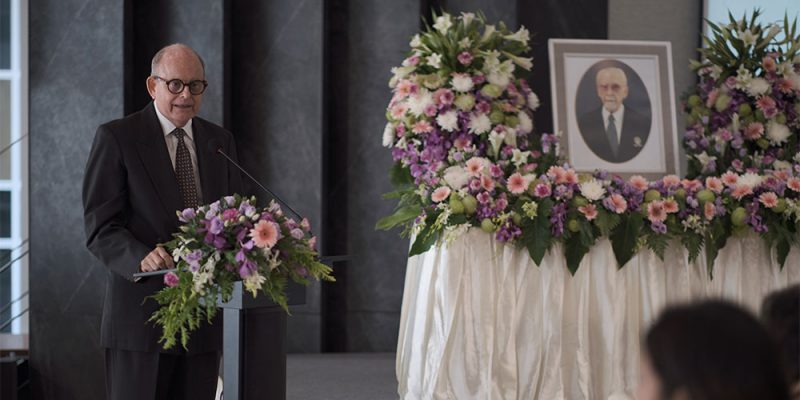 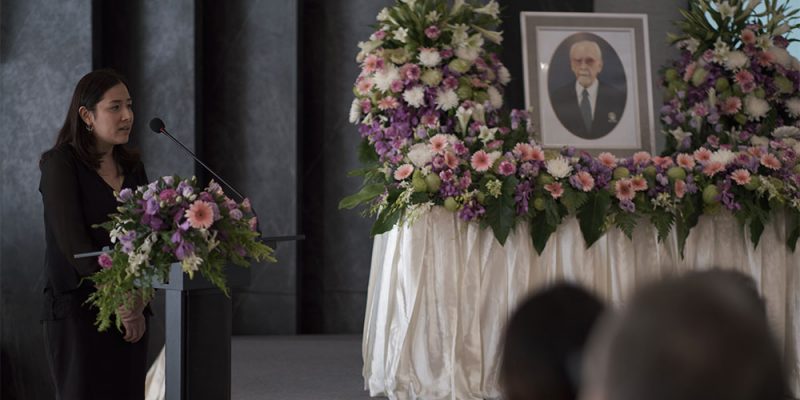 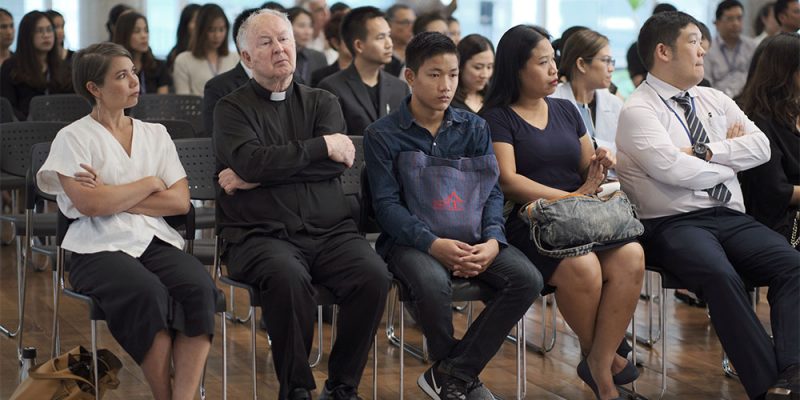 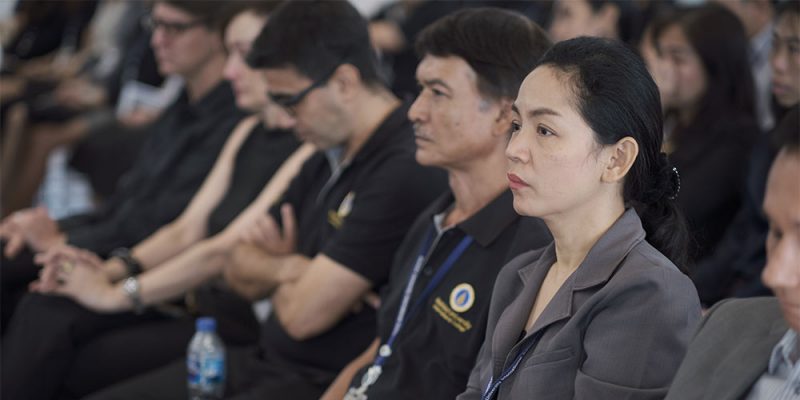 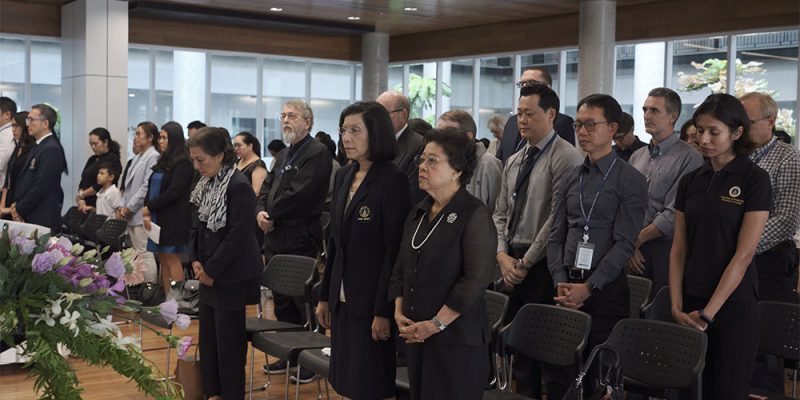 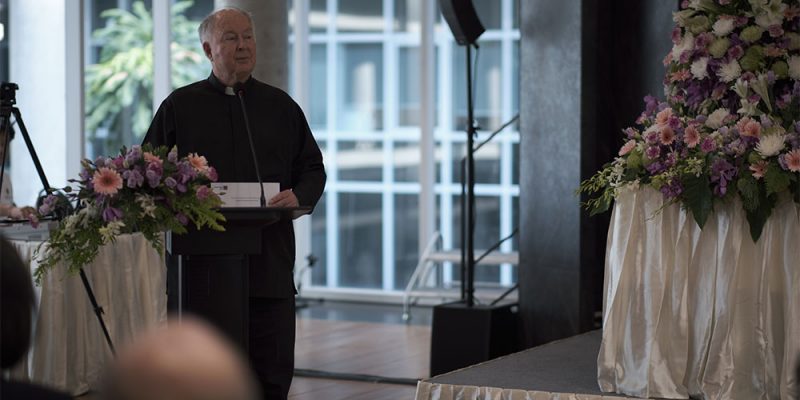