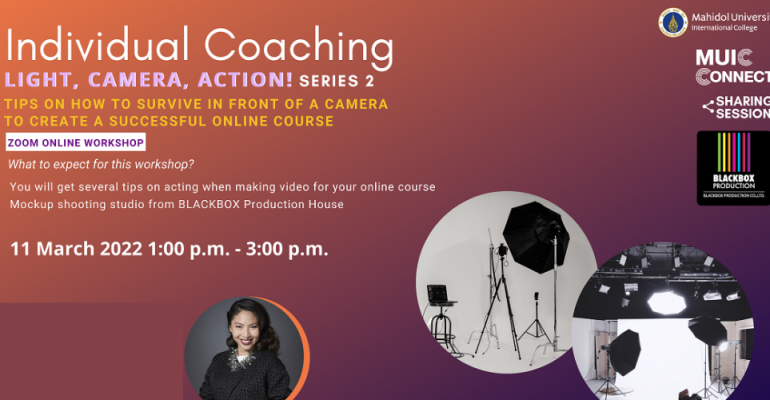 The Strategy and Academic Development Section under the OAA and the EdTech Unit organized its 6th workshop (academic year of 2021-2022) entitled ‘Individual Coaching Light, Camera, Action! Series 2’. Following the first session of ‘Light, Camera, Action!’, participants were given a chance to experience what it is like to transfer the written script into speech in the studio. Two groups of guests were invited to stage on the filming day to get feedback, and strengthen their acting and communication skills through training and individual coaching.

When delivering the speech, one should avoid reading the whole paragraph. There’s a technique called ‘scoring’ that can be used to divide the script into different sections. As if musicians or actors would normally do when they divide the script/note into ‘beats’, in order to deliberately make decisions about the way they are going to perform, not simply ‘talk’ or ‘play’. Scoring equals cutting the beat by each interpretation.  In each beat, you will dictate the objectives, which basically means convey what you want the audience to get and have. Each beat identifies the rhythm of the scene, so when the scene shifts, so does the rhythm.

For instance, if your big objective is to have the audience understand why this course matters, you may split the script into 4 beats as follows: a simple “hello” at an introduction paragraph is the beginning of the first beat. It’s saying that you extend a welcome to the audience, which then follows by stating what your course is intending to offer. The next beat is when you nail down the importance of the discipline, the third beat is to convince the audience that this course can satisfy different aspects of such discipline that no one ever knows, and the last beat is to show how this course empowers and allows you to exploit the gained knowledge. Each beat doesn’t only introduce different information, but also introduces different objectives, and moves the story forward to the new stage. Scoring a script together with the placement of blocking, voice inflection, voice stresses, and speaking tempo, allows you to understand the purpose behind each sentence, and shift your emotion/tactic/purpose/action accordingly, which eventually helps you envision how you will ‘communicate’ with the audience. In addition, there is a need to put the rhythm in each beat, and manipulate the speech tempo according to the context and emotions you want to get across, in order to yield the similar emotions from the audience.

Despite rehearsing the script before standing in front of the camera, you may have to retake and start the same script over and over. That’s when the energy you used starts to collapse, especially when there are many beats and details you have to attend to. Simply relax your mind and body, take a deep breath in and out, and start over as if it’s your first and last shot, although you have done two hundred times already. Because if you think you have to do it ten more times, you won’t be able to give 100% effort.

Another tip is to make use of nonverbal cues such as body movement, facial expressions, and hand gestures to get a message across as we need more than a speaking language to communicate and understand each other. Communication is more than just words; trembling hands could mean that a person is anxious or lying, a genuine smile and relaxed facial expression make listeners more comfortable, or an upright stance with feet in the V-Shape or pointing toward you suggests the sign of interest or attention.

In addition to scoring beats, make sure that you and the production team are on the same page. You need a director who manages the whole creative process of production, a cinematographer who elevates the director’s vision by switching the camera to the right angles at the right time to create the desired visual narrative, and post-production people who help consider what elements (ex. infographic, stock footage, video, etc.) should be added in or cut off, especially when there are less beats. With an online course, talking alone for two hours without those elements make the class tedious and less motivated for the students. Yet, too much of the picture/footage/video/voice over without the ‘face’ of the teacher doesn’t do them good either, especially in terms of mental health. Lack of interaction causes mentally draining which leads them to detach from the learning content.

Another technique is to adopt an appropriate voice tone. It’s a form of non-verbal language, and has been known to have an effect on the student’s rapport, engagement and productivity. The authoritative tone is required in some situations where you want to exude confidence and build credibility. But without the right balance you will sound too stern or exasperated, and the audience may feel more like they are being disciplined, rather than learning. Sugary-sweet tone isn’t likely appropriate, especially for higher education students. Instead, you may want to use an empathetic or understanding tone to convey a message and create a connection with the audience. Moreover, in case the course has more than one lecturer, make the most of those togetherness to reinforce each other to make your speech more powerful and convincing.

To sum up, scoring can help you better dissect and convey what the script is actually intending to deliver. Appropriately varying inflection and using theatrical tone increase engagement and help project the energy to the audience. Getting into “characters” makes the course more enjoyable and welcoming. And lastly, remember to make mistakes and have fun in front of the camera. Do not see it as your enemy nor mechanical tool. It’s where your students are, and where the learning begins. 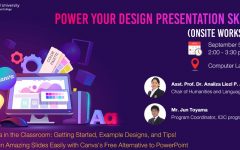 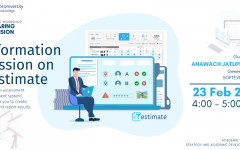 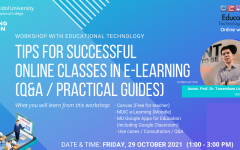 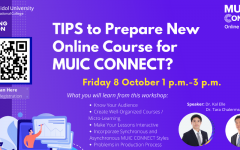 Workshop 8:Want to Develop an Effective Script for Your Online Course?