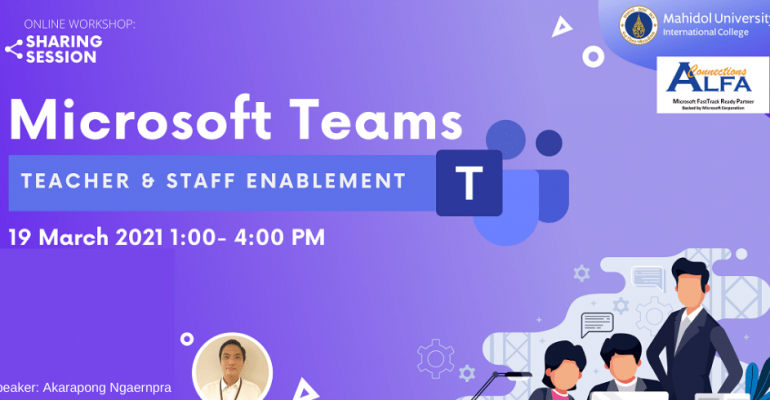 The Strategy and Academic Development Section under the OAA and the EdTech Unit organized its 11th workshop (academic year of 2020-2021) entitled ‘Microsoft Teams Teacher & Staff Enablement’. The purpose of this workshop was to have a better understanding of Microsoft Teams and it’s the benefits in the organization.

Teams was launched in 2016 as part of the Office 365 productivity suite. It is a collaboration platform that works as a central hub with features such as chat, voice, video and file sharing. Its power lies in users’ ability to work together through multiple different channels which could be public, open to everyone to join, or private where new users need to be authorized to join. In order to start Teams collaboration, a Team is set up with a team name and description, after which members to be added. Team has subsection called Channel which can be added based on the need of the users. However, there is a limit on the number of channels one can join, 200 public channels and 30 private channels per person. Each channel can have a small group chat. Furthermore, Team could be an organization and Channels could represent each department.

Within Teams, users can use a variety of Office365 apps to perform the tasks directly within one window. The tasks include the ability to share, delete, download, move, open, copy, edit file or links with other team members, offering all other features you would see in the native apps. While working on the file, team members can start a simultaneous group chat and each user can store conversations and team collaborations- from file sharing to video calls. Besides, Teams provides a function called Tabs which is Teams-aware webpages embedded in Teams as part of the Channel. It allows members of the team to access services and work with the tool in a designated space within a channel. The integrations with third-party tools include, for example, Office 365, Polly, Power BI, Wiki, Adobe Creative, and other web applications. Another useful feature of Teams is bots. These bots help handle the routine tasks such as send automated messages to groups or members, set self-reminders, organize meeting, and more.

Some organization may use Teams as an alternative – or even replace native email application, however, can be challenging. Because unlike other email applications, Teams requires a constant internet connection to start; this can cause issues with users who have limited internet connectivity. Other struggle that users might face is that everything that is uploaded to conversation will be put in the channel root folder. Therefore, when organizing the files, like move to other folders, the file link in the conversation might break. Another issue with Teams is that it allows user to create teams with names that may already be existing which could cause confusion among users of the teams under same name but different demographics.

Overall Teams usage reports are very positive in terms of usability, features, and offering. Moreover, since Mahidol University already offers Microsoft 365 license to all its personnel, users can enjoy full features available at no additional cost.