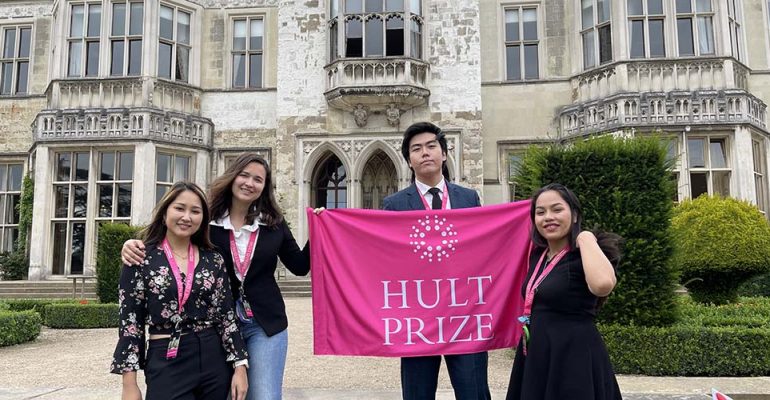 A student startup from Mahidol University International College (MUIC) competed in the Hult Prize Global Accelerator 2021 in August after winning the campus and national rounds.

Although the team was not able to proceed to the finalist round, it showed extreme adaptability and resourcefulness in the face of difficulties, and it was nominated by the judges as the most entrepreneurial startup at the accelerator.

The team described their time at the accelerator as an invaluable learning experience that inspired them to think and act as future leaders and change-makers.

The Hult Prize is an annual thematic competition that crowdsources ideas from university students to solve pressing social issues as the students compete for a seed fund of US$ 1 million. Endorsed by former US President Bill Clinton, the Hult Prize is the most prestigious award for social enterprises and is widely considered as the Nobel Prize for university students.

The MUIC team had been participating in this competition since November 2020. The team won the On Campus round of the competition at Mahidol University, and were announced as the winners of the Bangkok Impact Summit 2021. As a result, the team was selected to join the Top 40 finalists from 80,000 other competing teams to join the Global Castle Accelerator program, held in the United Kingdom on August 8 – September 12, 2021.

In August, the team traveled to the United Kingdom where they spent five weeks at Ashridge Castle. During that time, the team continued building their startup under the mentorship of global business experts, as well as pitching their startup to investors on a weekly basis.

The theme for this year was “Food For Good, Transforming Food into a Vehicle of Change.” The team originally entered the competition under the startup DITUS which aimed at empowering Thais living in poverty to farm snails for income. After many discussions with the experts, the team found a number of flaws in their existing business model. The team saw this as a learning opportunity and, taking advantage of the resources they had at hand, they decided to change their business idea. The team created Kratomic, a startup that aims to distribute and market Thai kratom – which was recently legalized – to the United States. Within a week, the team managed to come up with a whole new business model, tested their product on 50 people, and secured US$ 30,000 in presales.